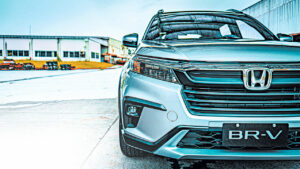 IN 2016, the Mobilio, a dynamic-looking people mover predicated on the Brio platform, was merrily minding its own business — and was seen to be holding its own in the country’s then-burgeoning multipurpose vehicle segment.

A new model put a stop to its reverie. That year, the BR-V — positioned as an SUV and with the commensurate prestige and premium attached to both the segment and the model family (think HR-V and CR-V) — became the more obvious choice for Honda browsers seeking seven-person transportation and a cache of cool. The Mobilio’s days were numbered, and was, indeed, quietly pulled from the Philippine lineup.

Around 300,000 of the first-generation BR-V have been sold around the world, said Honda Cars Philippines, Inc. (HCPI) President Masahiko Nakamura ahead of the unveiling here of the all-new BR-V last week. Locally, that number is 23,000 — clearly giving credence to the executive’s opinion that it’s a “well-loved” model. He added that the seven-seater takes its place among the three best-sellers of Honda here — the other two being the City sedan and the entry-level Brio.

First previewed locally last September at the Philippine International Motor Show, the all-new BR-V is quite literally and figuratively head and shoulders above the outgoing version. It is longer (4,490 millimeters versus 4,456mm), wider (1,780mm versus 1,735mm), taller (1,685mm versus 1,677mm), and stands higher off the ground (207mm versus 201mm) as well. The cargo capacity grows from 223 liters to 244 liters; even with both third rows folded, the all-new BR-V bests the first generation 530 liters to 521 liters. And when the second and third rows are stowed, the total cargo capacity is at 1,032 liters — making the vehicle a true payload mover. While the engine displacement stays the same at 1.5 liters, HCPI said that the heavier (1,298kg versus 1,250kg) BR-V is more frugal with the fuel because it is motivated by a DOHC engine versus the SOHC of the outgoing version, and gets going at lower torque. It also boasts more safety features “sealed with a five-star ASEAN NCAP rating, advanced technology, and powerful yet fuel-efficient engine,” according to HCPI in a release. “The feedback was positive and very encouraging,” joined HCPI Assistant Vice-President Misa Abe in a speech, who noted the model’s miserly fuel economy numbers and “excellent value propositions.”

Fuel economy figures as reported by HCPI (in partnership with the Automobile Association Philippines) are as follows: 24.71 kilometers per liter (kpl) for the V CVT, followed by the top-of-the-line VX CVT Honda SENSING registering 23.49kpl, and the 1.5 S CVT with 22.62kpl. “The test ran for 128 kilometers of highway driving, with (speeds of) 60 to 80kph at 1,500-2,000rpm, (with) air-conditioning at 24°C and Number 1 fan speed,” revealed the company.

Speaking of sales, Atty. Soriano added that the BR-V currently corners 9% of the small SUV segment, and the new model is expected to bump that figure up to 20%. The total share in Honda sales is anticipated to be as high as 50%. “It’s ambitious,” declared the executive, but the firm is confident on account of the upgraded features of the model. The previous generation moved an average of 300 units a month; HCPI is now looking to deliver 900 units a month.

The bullishness is certainly being reflected in HCPI’s year-to-date performance — notching 12.4% growth in sales versus the same period in 2021. In April this year, the company had rolled out the HR-V. “Notwithstanding the supply issue because of the global supply shortage, it was well-received,” commented Mr. Nakamura.

Replying to a question from “Velocity,” the executive assured that there should be no immediate problem with regard to supply. Of course, a global chip shortage and supply chain issue is already no secret by this time.

Additionally, this writer referenced a previous “Velocity” interview where HCPI had declared that more units across variants will be having as standard the company’s Honda Sensing suite of active driver assistance systems in aid of safety — noting that only the top-spec BR-V has that feature. “Definitely, we will gradually expand the (number of) Honda Sensing model variants gradually,” said Mr. Nakamura. “But for the BR-V we need to monitor the market acceptance, especially because this market is price-sensitive — a very important point for the customer.”

One of the positioning quirks for the BR-V is that it is being touted to have “SUV style and MPV value,” which at face value appears to be counterintuitive as SUVs and MPVs buyers are usually seen as distinct sets.

“The all-new BR-V basically combines the SUV value with the MPV value and the driving experience of a Honda,” explained Atty. Soriano to “Velocity.” He said that it basically offers values for more car browsers. “The MPV, expressed in the flexible space and seating capacity, meets the need for utility. The SUV aspect is in the high ground clearance, and comfort; then you round it out with the Honda driving experience. It’s practical and prestigious.”

For inquiries, customers may visit any of the 37 HCPI dealerships nationwide or the virtual showroom at www.hondaphil.com. The all-new Honda BR-V will be on display from Nov. 24 to 30 at the Alabang Town Center in Muntinlupa.