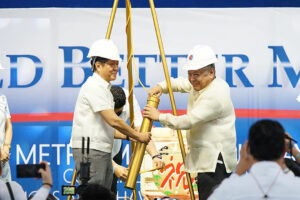 THE GOVERNMENT on Monday broke ground for the Ortigas and Shaw Boulevard stations and tunnels of the Japan-funded Metro Manila Subway Project Phase 1.

“As the Ortigas and Shaw Boulevard stations span through the business district of Pasig City, we look forward that this project will benefit approximately 150,000 passengers a day by the year 2028,” President Ferdinand R. Marcos, Jr. said during the groundbreaking ceremony in Pasig City, Monday.

The P17.75-billion Ortigas-Shaw subway segment is being undertaken by Megawide Construction Corp. and its joint-venture partners from Japan, Tokyu Construction Co. Ltd. and Tobishima Corp. It runs nearly 3.4 kilometers and consists of two subway stations.

The Ortigas-Shaw segment is part of the 33-kilometer, 17-station subway project from Valenzuela City to FTI-Bicutan in Parañaque City, with a spur line to the Ninoy Aquino International Airport (NAIA) Terminal 3 in Pasay City.

“With improving linkages of key areas in business districts in the metro as well as the availability of stalls and other stores in the stations and nearby markets, we can see more business opportunities for entrepreneurs and investors and additional economic activity,” Mr. Marcos said in his speech.

The department expects the Ortigas-Shaw segment to generate more than 18,000 jobs during its construction phase, according to Transportation Secretary Jaime J. Bautista.

“As we press on toward this common goal, our bilateral cooperation’s ‘fast and sure model is here to stay,” Japanese Ambassador Koshikawa Kazuhiko said in an e-mailed statement.

“With the full support of state-of-the-art Japanese technologies and skilled experts, the Philippines can be certain that Japan will continue to cooperate until this Filipino dream turns from a blueprint into reality,” he added.

The entire subway project is expected to cut travel time between Quezon City and NAIA from the current one hour and 10 minutes to just 35 minutes.

Once fully operational, the country’s first underground railway system is expected to service up to 519,000 passengers daily, the Transportation department said.

Transportation Undersecretary Timothy John R. Batan earlier said partial operation of the subway is targeted by the last quarter of 2027, with full operations by 2028.

To give way for the construction of the Ortigas and Shaw Boulevard stations, Meralco Avenue in Ortigas, Pasig City, will be closed to traffic beginning Oct. 3.

“The road closure will take effect until 2028 and will cover the front section of Capitol Commons up to the corner of Shaw Boulevard,” the Transportation department said.

The department advised the motorists to take alternative routes to be provided by the Metro Manila Development Authority, Land Transportation Franchising and Regulatory Board, and the city governments of Pasig and Mandaluyong.

Public utility jeepneys from Meralco Avenue going to Shaw Boulevard will be “rerouted to Captain Henry Javier Street and then to Danny Floro Street, and vice versa.”

Modern jeepneys coming from Meralco Avenue to Shaw Boulevard will be rerouted to Doña Julia Vargas Avenue, then to San Miguel Avenue, and vice versa.

UV Express vehicles will also be rerouted to Doña Julia Vargas Avenue to San Miguel Avenue or Anda Road, then to Camino Verde. 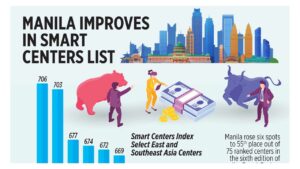