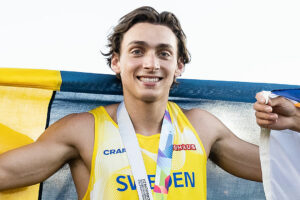 WORLD Championship pole vault bronze medalist EJ Obiena is planning to bring in World Nos. 1 and 2 Armand Duplantis and Chris Nilsen to the country in an invitational tournament Philippine Olympic Committee Abraham Tolentino will host in Tagaytay City next year.

The World No. 3 from the Philippines is also tagging along 2016 Rio Olympics gold winner Thiago Braz of Brazil in a star-studded affair that Filipinos will get to witness face to face for the first time.

“The objective is to bring them here after the outdoor season’s over,” said Mr. Obiena, who is in the country for a vacation.

After being told of this, the mayor from Tagaytay agreed to host the momentous event.

“The Picnic Grove here could be an ideal venue,” said Mr. Tolentino.

The setup will be similar to the format done in Europe — a street venue where the runway, the box, crossbars and landing area are all portable or collapsible.

“With the Taal Volcano as backdrop, what more could you ask for — a world-class pole vault action in one of the most picturesque tourist attractions in the country,” said Mr. Tolentino. “Every jump will be postcard-perfect, he added.

The European outdoor season ends in early September and with the Asian Games in Huangzhou set on the same month next year, Messrs. Obiena and Tolentino are looking at late September or early or mid-October as a potential date.

“This will be a spectator-friendly event, and it’s planned to be sanctioned [by World Athletics],” the Asian record-holder said.

Local tourism, Mr. Tolentino said, will be the beneficiary in the meet.

“It’s great for tourism and the Philippines will be in the international pole vaulting map,” said Mr. Tolentino. “It’s very doable despite next year’s busy schedule. It’s going to be a big event so we have to plan this carefully.”

The Philippine Sports Commission, now chaired by Noli Eala, and the Philippine Athletics Track and Field Association under Terry Capistrano are also expected to play a key role in the hosting.

“We are hoping to work with POC, PSC and PATAFA, it’s a mix collaboration,” said Mr. Obiena. “I also love to see Hackett de los Santos to experience and compete with the best athletes.”

Mr. Obiena was referring to the silver medalist at the Vietnam SEA Games last May.

“This is going to be historic that’s why I am pushing for it,” said Mr. Obiena. “Pole vault is a standard competition so it’s doable.” — Joey Villar