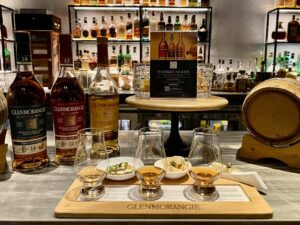 Glenmorangie’s flavor is based on the waters of Tarlogie Springs

WHISKY comes from a Gaelic word for water: uisge. Glenmorangie, a distillery that is almost 200 years old (founded in 1843) takes its cues from its water source, the Tarlogie Springs, thereby bringing the word’s meaning back to the spirit.

We learned this during a Whisky Nights tasting at the Conrad Manila’s C Lounge on Sept. 7, where Glenmorangie ambassador Kevin Charuel was a special guest. Glenmorangie, while owned by the Macdonald family for several years, would be later acquired in 2004 by luxury conglomerate LVMH (LVMH Moët Hennessy Louis Vuitton). It’s just one of the many spirits brands owned by the company — the Hennessy cognac brand is right there in their name.

The Lasanta 12 was a bit more special. “The inspiration behind the creation of this whisky was the sunset,” he said. It had a scent of shaved dark chocolate, some musk; but one that was heavy with spice and dark fruit. Finished in sherry casks, it had a gentle smolder, like a candle just before it’s put out.

Finally, the Quinta Ruban 14 Years had a woody and herbal scent, like a walk through a forest; or perhaps firewood right before it’s lit. It’s quite heavy and designed for slow, meditative drinking — perhaps by a fire. It had a hot and peppery note tempered by a note of caramel that tapered out into a low, lingering heat.

The brand can trace its taste to several factors. Mr. Charuel points out that they own the tallest copper pot stills in all of Scotland (he says that they’re about as tall as giraffes). “We can have more space to develop more flavors through the copper,” he said.

On the note of water, he said about the centuries-old Tarlogie Springs: “It brings a specific minerality that will translate into fruitiness,” he said, crediting this to the rocks that sit on the springs. “When we use this water to produce our whiskies, then we can express and translate all the fruity character.”

Its ownership by a French conglomerate can also explain its qualities, even if it is a single-malt Scotch (the conglomerate also owns whisky brand Ardbeg). The French connection is there in Scotland: one remembers the Auld Alliance they entered with France in 1295 to fight against England, not to mention the various princesses traded in marriage between the two kingdoms (Mary, Queen of Scots was made Queen of Scotland about a week after her birth; in turn she married into the ruling House of Valois in France).

“It brings its expertise and know-how to create and to distribute amazing products,” he said of LVMH. “Luxury is not about price,” he said. A quick look at Glenmorangie 10’s price places it at P2,500, give or take. “It’s luxury for different reasons. The main reason is know-how.”

“Only a few people know how to do it, and we cannot do it everywhere in the world.”