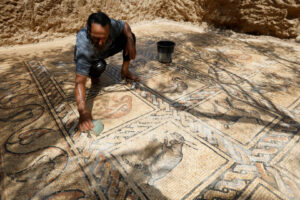 GAZA — An ornate Byzantine floor mosaic showing a variety of colorful birds and other animals has been discovered by chance in Gaza after a Palestinian farmer tried to plant new trees on his land.

Salman al-Nabahin unearthed the relic six months ago while working in his olive orchard in the Bureij refugee camp, about a kilometer from the border with Israel.

Trying to figure out why some trees had not properly taken root, Mr. Nabahin said he and his son began digging. Then the son’s axe hit something hard and unfamiliar in appearance.

“I searched on the internet … We learnt it was mosaic belonging to the Byzantine era,” said the father-of-seven, sitting next to his discovery. “I see it as a treasure, dearer than a treasure. It isn’t personal, it belongs to every Palestinian.”

The Palestinian Ministry of Tourism and Antiquities said the flooring included several mosaic panels depicting animals and other features of social life during the Byzantine era.

“The archaeological discovery is still in its early stages and we await to know more of the secrets and civilization values,” the ministry said in a statement. “National research teams are working in partnership with international experts and scientists from the French Archaeology School.”

Gaza is rich with antiquities, having been an important trading spot for civilizations dating as far back as the ancient Egyptians and the Philistines depicted in the Bible, through to the Roman empire and the crusades.

Several discoveries have been made in recent years. But due to a lack of funds and relevant professionals, Gaza has usually invited international groups to help with the process of excavation and preservation. — Reuters