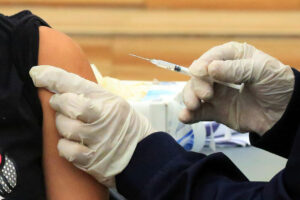 After months of keeping universities in the dark regarding the education or employment rights of unvaccinated students, faculty, and non-teaching personnel, and months after Vice-President/Department of Education Secretary Sara Duterte called for the lifting of any discriminatory treatment on the unvaccinated, the Commission on Higher Education (CHED) finally relented.

As reported in news media, CHED Chairman Popoy de Vera justified the lifting of mandatory vaccination requirements by pointing to ostensible high vaccination levels, with nearly 76% of college level students and 90% of university personnel being vaccinated. Allegedly, the announced change in policy was also based on global trends observed since November 2021. Nevertheless, such reasons remain highly unconvincing, to say the least.

The Philippine vaccination rate amongst the general population was in the 60% level since March 2022 and plateaued at 65% since July, without any substantial change in the numbers since then. What this means is that our youths could have actually gone to school on time, without drama, by the start of this school year.

The only credible reason for allowing everyone to attend face-to-face classes is simply the utter absence of a legal basis to differentiate between the unvaccinated and vaccinated, except, ironically, for the latter being vulnerable to possible adverse reactions.

“Dr. Martin Kulldorff, until recently Professor at Harvard Medical School and member of the Drug Safety and Risk Management Advisory Committee, has now concluded, based on new studies, that the safety profile of mRNA vaccines against COVID-19 is concerning,” according to the article “Serious Adverse Effects from COVID Vaccines ‘Very High, No Other Vaccine Comes Close,’ says former CDC Vaccine Safety Committee Member,” by Thorsteinn Siglaugsson which came out in several websites including The Daily Skeptic.org on July 4.

“Dr. Kulldorff has until now been supportive of the vaccines for older people; as an example, as a member of the CDC vaccine safety committee he went against the CDC in April 2021, arguing that the Johnson & Johnson vaccine should not be withheld from older Americans despite concerns regarding side-effects in younger people. He has always said those with previous infection and children did not need to be vaccinated, however,” wrote Mr. Siglaugsson.

“In a new article published by the Brownstone Institute, Dr. Kulldorff refers to two recent studies. First, a new study by Fraiman et al., based on trial data from Moderna and Pfizer, which shows one serious side effect per for 800 vaccinated persons. This, in Kulldorff’s words, ‘is very high for a vaccine. No other vaccine on the market comes close.’

“Dr. Kulldorff also refers to a recent study by Christine Benn et al. that shows the mRNA vaccines do not lead to any reduction in all-cause mortality, based on the same data as the Fraiman study.

“While Dr. Kulldorff says the mRNA vaccines may be of benefit to people over 70, when it comes to others, this is his conclusion: ‘It is unclear from the clinical trial data whether the benefits outweigh the risks for working-age adults who have not been vaccinated and who have not already had COVID. This is true both historically, for the original COVID variants, and currently for the newer ones.’”

The key point is that the CHED’s announcement is regrettably late considering what had been suspected for months before:

• That the unvaccinated are not significantly experiencing COVID infections or reaction different than that of the vaccinated;

• That the vaccinated are as vulnerable to being COVID infected or transmitting infection as the unvaccinated;

• Cumulating reports of country excess deaths and of vaccinated people, especially the healthy under 40 years of age, experiencing severe adverse reactions, even death.

Hence, a term that has now entered the popular vocabulary: SADS or Sudden arrhythmic death syndrome, which the Royal Australian College of General Practitioners describe as “an umbrella term to describe unexpected deaths in young people (usually 40 years of age), whose cause of death following post mortem examination is ‘undetermined’ or ‘unascertained.’”

A further problem with the CHED’s unjustifiably delayed announcement is that for many of our young, the highly potential damage had been done. Many parents, fearing their kids will be deprived of a proper education, were forced to vaccinate their children, some as recent as a day or two before the CHED’s announcement.

And what of faculty and non-teaching personnel that were either forced to be vaccinated or had to continuously pay for months the expense of an RT-PCR test?

Many are now left with the growing knowledge that they possibly injected into their or their children’s bodies a drug that could have possible negative effects happening anytime soon or in years to come. Reports are that such go the range from myocarditis, blood clots, reproductive problems, even infertility, and death.

The liability of officials, public or private, that created such a coercive environment around COVID vaccination is clear.

Finally, it must be stated that should a university persist in prohibiting unvaccinated students, faculty, and staff inside the university, such cannot be justified under academic freedom and will render those universities liable for damages.