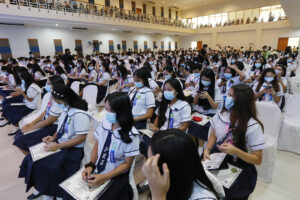 TRADE Secretary Alfredo E. Pascual said most employers are still stipulating university degrees in their hiring requirements, adding that the Kindergarten to Grade 12 (K-12) program needs to ensure that its graduates are really workforce-ready.

“When the K-12 was introduced, I recommended that (companies) review the qualifications for hiring because there is no need for a college degree (for many jobs),” Mr. Pascual said on DZMM Teleradyo.

“When you check the job descriptions nowadays, almost all require college degrees. This should change because we already have the K-12 program. But it’s still not enough to say that having the program is enough. We need to prove that the K-12 program is able to produce holistically-developed individuals,” he added.

K-12 extended the basic education cycle by two years at the secondary level. It was designed to make students employable after completing the program.

In July, President Ferdinand R. Marcos, Jr. gave the Department of Education one year to review on the program and make recommendations on continuing it or not.

According to a Pulse Asia survey, 44% of 1,200 respondents were reported to be unhappy with the current system. It found that the main concern of families was the financial burden while not boosting employability.

“When K-12 was formed, its purpose was to produce holistic Filipinos. This means if you graduate from the program, assuming it was implemented properly, then you are ready to join the labor force. You don’t need to go to college,” Mr. Pascual said.

He said that there is a deeply ingrained expectation that workers be college-educated.

“The mindset of people is that you cannot fully prepare for work when you don’t have a college degree, which is totally an erroneous mindset,” he said.

“Whoever is in charge of reviewing the educational system needs to pay close attention (so that) we have all the ingredients for running a K-12 program that’s well designed and well implemented,” he added. — Luisa Maria Jacinta C. Jocson