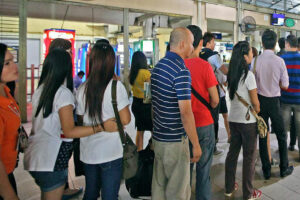 THE Transportation department said on Thursday that the automated fare collection system (AFCS) will be opened up to competition, barring monopolies from seizing control of a key component of the transport modernization program.

“We want an open automated fare collection system to avoid a monopoly and what that achieves is choice — choice for our public transport operators on which equipment to use, AFCS provider, and overall maintenance they have to adopt (to lower) the overall cost of our transportation service,” Transportation Undersecretary for Planning and Project Development Timothy John R. Batan said during the interim launch of the AFCS at the Parañaque Integrated Terminal Exchange.

The department also signed an agreement with Land Bank of the Philippines (LANDBANK) on Thursday for the rollout of the Europay, MasterCard and Visa (EMV)-compliant AFCS.

According to LANDBANK, a total of 150 public utility vehicles (PUVs) in the National Capital Region, Central Luzon, Calabarzon, and Metro Cebu will participate in the AFCS pilot test.

“The AFCS, which allows the convenient use of EMV-compliant contactless credit, debit and prepaid bank cards as cashless payment instruments in public transport modes, will be tested under a real-time operational conditions in preparation for its full and commercial implementation,” the bank said.

It said that only LANDBANK prepaid and credit contactless cards will be accepted and processed in the 150 participating PUVs during the first month of the AFCS pilot period.

“Once the necessary regulations or policies have been issued, the LANDBANK AFCS solution can also accept and process the EMV contactless cards issued by other banks,” it said.

The bank said that it has distributed more than 4.5 million EMV cards that can be used in the AFCS system, with another 1.9 million cards available for account holders to claim.

Transportation Secretary Jaime J. Bautista said: “The institutionalization of the AFCS will bring us closer to the goal of achieving global standards in cashless payments when commuting, following the norm in many other countries that have long been using this system.”

“I would like to believe that the majority of our commuters, not just here in Metro Manila, have overcome the reluctance to embrace technology in our mass transport system because they have seen the significance of technological advancements to ease their commute,” he added.

“Through LANDBANK Contactless Cards, we look forward to making the daily journey and payment experience of commuters as seamless as possible.” — Arjay L. Balinbin