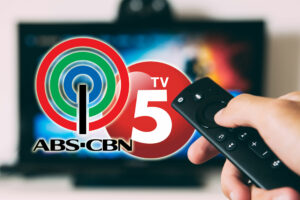 ABS-CBN CORP. and TV5 Network, Inc. of the Pangilinan group’s MediaQuest Holdings, Inc. on Thursday said they have “mutually agreed” to terminate their landmark investment deal, after some lawmakers raised questions over its legality.

The two media companies signed a memorandum of agreement on Aug. 31 to scrap the investment deal they signed on Aug. 10, ABS-CBN told the stock exchange on Thursday.

“The parties confirmed that they have not implemented any of the transactions covered by the investment agreement,” ABS-CBN said, without giving a reason for the termination.

Under the deal, ABS-CBN was supposed to acquire 34.99% of TV5 for P2.16 billion. The former expected that its investment in TV5 would “open significant opportunities for revenue enhancement, cost efficiencies, and various synergies.”

At the same time, the Lopez-led network and MediaQuest terminated the deal between their subsidiaries, in which Cignal Cable Corp. would acquire a minority 38.88% stake in Sky Cable Corp. for P2.86 billion.

Last week, the two companies said they paused the closing preparations for their partnership to address concerns regarding the deal.

They were referring to the issues raised by some lawmakers and the National Telecommunications Commission (NTC).

Three resolutions were filed at the House of Representatives seeking an investigation into the ABS-CBN-TV5 deal.

Among the issues raised was the ownership of TV5. Sagip party-list Rep. Rodante D. Marcoleta has claimed that it is owned by a foreign national.

According to the PLDT group’s statement in 2013, “all of the trustees, as well as beneficiaries, of the PLDT Beneficial Trust Fund are Filipino citizens.”

NTC Commissioner Gamaliel A. Cordoba said during a House briefing on ABS-CBN’s investment agreement with TV5 on Aug. 24 that the two media companies should first obtain clearances from the regulator.

“The commercial agreements together with such clearances should be submitted by the franchise grantee to the NTC prior to consummation,” he said.

‘CASUALTY OF POLITICS’
Lawyer and political analyst Michael Henry Ll. Yusingco said the investment agreement between ABS-CBN and TV5 “was not defective.”

“None of the creditors or debtors of the parties have raised any concern or complaint about it. Hence, it’s hard not to see the cancellation of the agreement as the casualty of power politics,” he said in an e-mailed reply to questions.

“Whatever positive outcomes they could have hoped for, such as more jobs for Filipinos, better quality shows, and wider media reach, would not compensate for the hassle and stress political intervention brings,” he added.

For her part, Maria Ela L. Atienza, a political science professor at the University of the Philippines-Diliman, said in a Facebook Messenger chat, that the decision to terminate the transactions was “surprising.”

“This is also troubling in the sense that we cannot count on business stakeholders to honor or to commit to partnerships and agreements,” she added.

She said that ABS-CBN is free to enter into other partnerships. “It has a deeper talent pool and viewers than TV5 and being fully digital can partner with international entities,” she added.

Ms. Atienza said it may be possible that recent questions raised by Mr. Marcoleta and other lawmakers had affected the deal.

“In any case, [it is] the public, especially in rural areas where ABS-CBN used to have stations, that continues to lose access to timely information relevant in daily lives and even survival with the absence of a franchise for ABS-CBN… As a business, ABS-CBN has more options for its survival,” Ms. Atienza said.

Terry L. Ridon, a public investment analyst and convenor of think tank InfraWatch PH, said in a separate phone message: “This had everything to do with politics, as the same actors who opposed the ABS-CBN franchise are the same actors questioning the terminated deal.”

“This bodes ill for the governance climate in the country.”

For Mr. Yusingco, an even “worrisome” impact of the deal termination is that it “taints the business environment of the country, particularly in the eyes of foreign investors.”

He said the decision confirms fears “that political intervention and influence trumps the rule of law.”

“We already suffer from a reputation of having a weak legal regime for the enforcement of contracts, so for foreign investors to witness the capitulation of two media giants can only make them less inclined to invest in the country,” he added.

For Mr. Ridon, the fate of ABS-CBN and TV5 transactions serves as a “warning to businesses.”

“This is not the governance climate that the country needs today, particularly at this time of great economic difficulty. With this development, investors looking at the Philippines as a prospective investment destination will might as well bring their funds to other emerging economies with a better governance outlook,” he said.

ABS-CBN was forced to stop its broadcast operations in May 2020 after former President Rodrigo R. Duterte’s allies in Congress denied its franchise renewal application.

Hastings Holdings, Inc., a unit of PLDT Beneficial Trust Fund subsidiary MediaQuest Holdings, Inc., has a majority stake in BusinessWorld through the Philippine Star Group, which it controls.