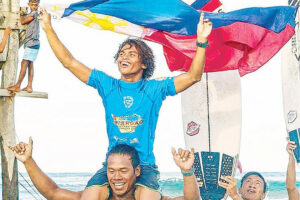 SOUTHEAST Asian Games (SEAG) gold medalist John Mark Tokong vanquished the waves of Kata Beach as he captured a gold medal in the Phuket Beach Festival 2022 staged over the weekend.

Mr. Tokong, fondly called “Marama,” was a cut above the rest in the men’s short board competition where he struck gold after beating Indonesian Nyoman Satria Mukti by registering 15.30 points, or 1.9 points ahead of the latter.

It was another triumph for the 26-year-old after he struck gold in the 2019 SEA Games in La Union as well as the 25th Siargao International Surfing Cup held the same year.

CASUGAY WINS
Another Filipino, Roger Casugay also made his presence felt as he took home a bronze in men’s long board.

Phuket Beach Festival 2022 which was sanctioned by the Asian Surf Cooperative, was participated by surfers from the 12 countries in the Asia Pacific region namely host Thailand, Japan, Indonesia, Malaysia, and Australia, among others. — Joey Villar