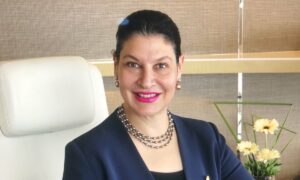 That woman is Linda Pecoraro, General Manager of the Hilton Worldwide Holdings, Inc.’s luxury property Conrad Manila. She held the top position of General Manager at a luxury property in a city where hotels are mostly headed by men. Second of all, she held that position in the middle of the COVID-19 pandemic, taking over the reins in the middle of 2020, at the very height of the pandemic, when the city was locked down.

She is leaving the country this month for another posting. During a farewell lunch at the hotel’s restaurant China Blue by Jereme Leung, we got an insight into what qualities a hotel manager should possess.

“I think times are gradually changing,” she said about being one of a handful of women in the city taking the top spot at a hotel. “Certainly with Hilton, we have quite a number of up and coming general managers, so that’s definitely changing. Watch this space,” she said.

In response to a question if there was a difference between the way the genders manage hotels, she said, “It’s [a matter of whoever] is the best person for the job. I think that males and females bring different qualities and different abilities to the table.

“At the end of the day, for me, it’s not about gender. It’s about doing the best possible job you can do.”

Asked to elaborate, she said, “Again, it depends on the person. But I think it’s very important that whoever is the general manager has an eye for detail, has great service and business acumen, and… resonates with their customers and their team members in the business community.”

Hailing from Australia, Ms. Pecoraro studied at the College of Tourism and Hospitality in Brisbane (her LinkedIn profile also lists a Masters Certificate in Hospitality Management from Cornell). “If I go back to my classmates now, there’s only three of us still in the industry,” she said. “It was pretty grueling,” she said about her studies. “Not only was it theory, there was a lot of practical as well,” she said, noting apprenticeships they did once they graduated. Her hotel career took her across Asia: her workplaces have included the Hilton Petaling Jaya, Kuala Lumpur, and Kota Kinabalu. She notes that she has been in the industry for 30 years —  “Don’t tell anyone!” she jested with laughter.

Commenting on the difference between hotel culture in the East and West, she said, “The East has service in their heart. In the Philippines, it’s second nature.”

This proved crucial in her tenure at the Conrad during the pandemic. “We changed the total dynamics in the way we did things,” she said, noting that the hotel had been turned into a quarantine facility early in the pandemic. She was proud to say that they had gone on for two years without too many casualties, drama, or staff being let go, which enabled them to support their families amid crisis. “That was very important to me,” she said.

She then noted what qualities a general manager should have during a crisis situation, such as the one we have just passed (and from we are all still recovering). “Being calm helps,” she said again with laughter. “You have to be calm, strategic. You have to show true leadership skills. If —  God forbid —  that there’s an emergency or crisis, you are the person on the ground, dealing with ownership, the corporation, the authorities. You’re also dealing with the guests and the team members, and their families, who are very concerned for them during a crisis.

“It all comes down to leadership and great communication skills,” she said. — JLG