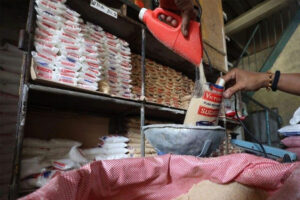 THE PHILIPPINE Sugar Millers Association, Inc. (PSMA) on Tuesday said the country’s sugar shortage is real and was not artificially caused by hoarding.

“Hoarding and smuggling are symptoms of a supply deficit,” Sugar Millers Association President Pablo L. Lobregat told a Senate blue ribbon committee hearing. “They are not causes. I do not believe that it is artificial.”

The presidential palace earlier said the huge volume of sugar seized by Customs agents in various warehouses in Luzon showed the sugar shortage is artificial and was brought about by hoarding of sugar by unscrupulous traders.

The businessman denied hoarding sugar. “We are just a warehouse at this point in time because most of that sugar there is not ours to sell. We are just holding it until people bring in the warehouse receipts so they can withdraw.”

On the sugar fiasco, Mr. Lobregat said the industry was consulted about the plan to import 300,000 metric tons of sugar. “All stakeholders were consulted before the issuance of that order.”

“We do not know what the other consulted parties said, but I remember the PSMA did recommend 300,000,” he said.

The industry saw the estimated sugar deficit toward the end of August, he said, adding that the SRA has complete data on average demand for the past three crop years.