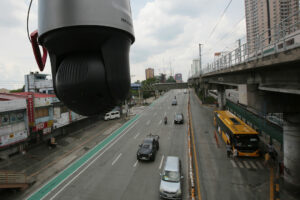 In a statement on Tuesday, the High Court said it had also stopped the Land Transportation Office (LTO) from giving out motorists’ information to local government units.

“The court also said that any apprehensions through the no-contact apprehension policy and ordinances related thereto shall be prohibited until further orders from the court,” it added.

The tribunal, which had yet to upload a copy of the order on its website, set a hearing on the lawsuit for Jan. 24.

Several transport groups earlier asked the tribunal to void down the government’s so-called no-contact apprehension policy, which they said is prone to abuse by law enforcers.

The cities of Manila, Muntinlupa, Parañaque, Quezon and Valenzuela as well as the Metro Manila Development Authority are enforcing the traffic policy.

The tribunal said it had issued the temporary restraining order “without necessarily giving due course to the petitions.”

A separate website will be created to give the public access to pleadings related to the case, it added.

In a statement on Aug. 9, he said local governments should sit down with the LTO to iron out guidelines and hear out complaints from public utility vehicle operators.

He noted that traffic enforcers might subject motorists to excessive and unreasonable fines and penalties.

“We are also worried that motorists may be wrongfully burdened — not by the cost of violating traffic laws, rules and regulations — but by the cost of the technologies used in the no-contact apprehension policy,” Mr. Rillo said.

The first lawsuit was filed by transport groups Kapit, Pasang Masda, ALTODAP and ACTO against the five cities and the Land Transportation Office on Aug. 3.

They questioned local ordinances on the no-contact apprehension program.

The High Court on Aug. 16 ordered the respondents to comment on the petition and the plea to stop the policy within 10 days.

A lawyer who was fined more than P20,000 for alleged traffic violations filed a separate lawsuit on Aug. 18.

The Land Transportation Franchising and Regulatory Board had asked the cities to suspend the policy until the guidelines are clarified, but their mayors, backed by the Metropolitan Manila Development Authority, bucked the call.

This supposedly cut corruption, created a culture of discipline among motorists and ensured road safety by reducing traffic violations.

“The implementation of the no-contact apprehension policy never disregarded motorists’ due process since each local government unit has its respective traffic adjudication boards where motorists can contest and file protests or appeals,” they said. — John Victor D. Ordoñez