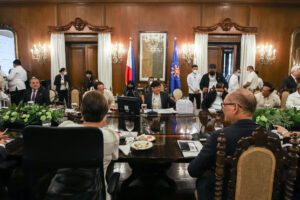 PRIORITY programs of the Environment and Science and Technology departments were discussed during a Cabinet meeting on Tuesday, according to the presidential palace.

Among the priorities of the Department of Science and Technology (DoST) is the creation of technology-based enterprises “for regional development,” Press Secretary Trixie Cruz-Angeles told a televised news briefing.

Plans on food security and resilience, health security, water security and environmental protection were also tackled by DoST officials at the meeting, she added.

It also talked about budget realignment and collaboration with other agencies, local governments, the private sector, academe and other stakeholders. — Kyle Aristophere T. Atienza