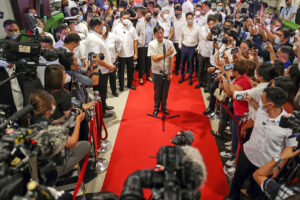 I am pleased to share with readers the political section of our quarterly economic report to Globalsource Partners (globalsourcepartners.com) subscribers titled “So far, so good (Aug. 25). Globalsource Partners is a New York-based network of independent analysts in emerging markets. Christine Tang and I are their Philippine advisers.

Ferdinand “Bongbong” Marcos, Jr. (BBM) has comported himself well in the first month and half of his presidency. First, he chose good men, based on competence and integrity rather than personal ties, to lead key cabinet posts. Then, he lent credibility to his economic team, opening his first policy speech to congress with their growth and development goals and, importantly for credit markets, the medium-term fiscal consolidation program, and then said all the right things in the rest of the speech.

Likewise, perhaps to signal that he is neither populist nor beholden to anyone, he exercised the presidential veto and sent back to congress three notable bills, two of which benefited business groups that were reputedly major sponsors in his campaign and another favoring the teachers serving in elections through the grant of impractical tax exemptions. His continuing silence on the popular policies he espoused on the campaign trail, notably P20 rice and an oil price stabilization fund, as well as his and the economic managers’ active engagement with the business sector further bolstered beliefs that the economic team has his ear.

So far so good.

Not quite. His administration’s recent flipflopping on whether to import sugar, where prices rose 36% year on year and 13% month on month in July, is testing the President’s leadership mettle. To recall, the President appointed himself agriculture secretary in June, which we said was either a bold move or an ill-advised one.

The issue of sugar imports, a source of largesse for the politically well-connected, is not new. Volumes are decided by a government-owned corporation, the Sugar Regulatory Administration (SRA), which is administered by a board chaired by the agriculture secretary with members representing politically powerful planters and millers. The SRA not only controls domestic supply through imports but decides how much of local production will be allocated to meeting US quotas and how much for domestic consumption. This central planning system, coupled with the sector’s relatively poorer productivity, has translated into comparatively high domestic sugar prices, as much as twice the world market price in the past 10 years.

The latest controversy involves an order to import 300,000 metric tons of sugar signed by members of the SRA Board earlier this month. An agriculture undersecretary, who was designated ex-officio chair representing the President, signed the order on behalf of the President. Many thought that what transpired soon after was tantamount to the President and his Palace team throwing a highly regarded technocrat under the bus.

First, through his spokesperson, the President disavowed knowledge of the importation order, calling it “illegal.” Then, his executive secretary, who issued the memorandum that gave the undersecretary authorization to sign, told a senate hearing that while he had the importation order drafted, he had expected the undersecretary to get the President’s approval first before signing. In the meantime, inspection teams have been sent to warehouses to show the public that there is no shortage of sugar locally.

What happened behind the scenes is the subject of plentiful speculations. Whatever the inside story, the President has since agreed to importing sugar but at half the original volume and at a later date. The question is, is this decision based on sound economics or political accommodations? So far retail prices of sugar are unchanged despite reports of large supermarkets having been persuaded to sell the product at a discount. Another worrying sign is the suspension of operation in some plants of a large multinational beverage manufacturer reportedly due to lack of sugar.

We are not quite sure what this seeming first major misstep means, but it is being closely watched as a possible canary in the coal mine.

Throughout our Presidential history, including the Marcos Sr. administration, there have been tugs of war between economic technocrats and the more politically oriented advisers, driven by short term popularity, power consolidation, or fund-raising agenda. How this administration, and thus our economy, fares over its entire term, amidst all the daunting economic challenges, may well depend on who the President listens to.

Romeo L. Bernardo was finance undersecretary from 1990-96. He is a trustee/director of the Foundation for Economic Freedom, Management Association of the Philippines, and FINEX Foundation. He is Philippines principal adviser to Globalsource Partners