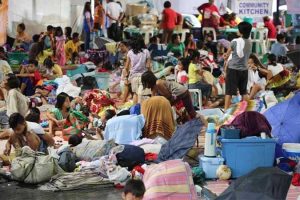 A SENATOR has filed a bill that seeks to set up evacuation centers in every Philippine city.

“We should no longer be using classrooms as evacuation centers, especially since it delays the continuation of education after a disaster,” Senator Sherwin T. Gatchalian, who filed the bill, said in a statement in Filipino on Sunday.

Almost 400 classrooms had been completely destroyed when typhoon Rai, locally known as Odette, ravaged the country in December 2021, while 397 were partially damaged, the lawmaker said, citing a government report.

Meanwhile, 11 schools in Central Luzon, nine in Cagayan Valley, eight in the Cordillera Administrative Region and seven in the Ilocos Region were damaged by the magnitude 7.1 earthquake in July.

The bill requires that areas used for evacuation can withstand wind speeds of 320 kilometers per hour and moderate seismic activity.

The Philippines is vulnerable to earthquakes, volcanic eruptions, tropical cyclones, and floods making it one of the most disaster-prone countries in the world, according to the World Bank.