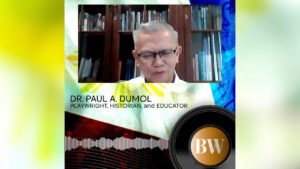 In this B-Side episode, playwright, historian, and educator Dr. Paul A. Dumol talks about the birth of the Filipino nation, a relatively new concept that emerged at the beginning of the 20th century.

In a conversation with BusinessWorld reporter Diego Gabriel C. Robles, Dr. Dumol touches on the writing of National Hero Jose P. Rizal, author Nicomedes “Nick” M. Joaquin, and historian Teodoro A. Agoncillo to answer the questions: Who was the Filipino then? Who is the Filipino now? Where are we, the Filipinos of today, headed as a nation?

“What does ‘being Filipino’ mean,” Dr. Dumol said in the vernacular. “I think it means, at the very least, love for everybody else.”

TAKEAWAYS
Nationalism is new and not everybody understands it.

Dr. Dumol theorized that nationalism spread widely and quickly among Filipinos through the public system installed by the Americans.

“This notion … really emerges only in the beginning of the 20th century. And I’m sure not very many people felt it,” he said. “This idea is relatively new, and not everybody understands it.”

“I think our problem is understanding the duties and responsibilities that come with citizenship,” he continued.

“Many times, when we complain about people who are corrupt. … We see that their motivation is frequently their family. They’re thinking of their family. But we may complain, ‘wait, can’t you also think of the nation?’ and there’s so many anecdotes about that tension,” he said.

“It’s very hard for us to transcend the universe of the family — I’m not saying that we should abandon our families or that we should be indifferent to them. [Rather], we should not be exclusively focused on our own families, and consider that we belong to a society. We should think not only of ourselves but also about everybody else.”

True integration means that no one gets left behind.

According to Dr. Dumol, true integration goes beyond political sloganeering and takes into account all social groups — whether national, regional, or familial — and loving each without neglecting one for the sole benefit of another.