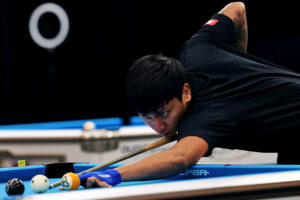 With the game knotted at 10 racks apiece, the 30-year-old Mr. Aranas had a heartbreaking scratch in the 21st frame that allowed Mr. Ko to get the rack, break the deadlock and the lead that he held on to until the end.

Mr. Ko then put on the finishing touches with a pair of spectacular break-and-runs in the 22nd and 24th in this alternate break format to crown himself Open champion.

The Taiwan World No. 4, who won world titles in 9-ball and 10-ball seven years ago, completed his mastery over the Filipinos as the former was also responsible in eliminating Johann Chua, 11-2, in the semis.

Mr. Aranas, for his part, turned back Japanese Naoyuki Oi, 11-6, in the other semis but ran into mighty Mr. Ko in the finals where  he succumbed to the pressure.