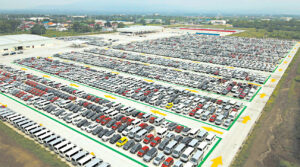 TOYOTA MOTOR Philippines Corporation (TMP) was recently recognized as the second top importer by the Bureau of Customs (BOC)-Port of Batangas (POB) from the period of January to July 2022.

The country’s largest automotive and mobility company remitted to the government a total of P16.46 billion in the form of duties and taxes. The amount is the second highest collected by the POB, contributing to the port’s higher revenue performance versus the same period last year.

TMP works with the POB for the importation of automotive products including various Toyota and Lexus vehicle models, multi-sourced parts for production, and service parts from the Asia Pacific region.

Moreover, the POB serves as a major gateway for TMP’s distribution of automotive products to Toyota dealerships in the Visayas and Mindanao regions.

At the 32-hectare TMP Batangas Vehicle Center (BVC), TMP processes completely built-up units (CBUs) arriving from the nearby POB at a higher capacity and level of efficiency.

TMP First Vice-president for Vehicle Logistics Aimee Josephine Lopez said the BOC has always been crucial in supporting the local automotive industry and TMP in its commitment to deliver quality products and services to Toyota customers. “Process automation initiatives as well as the highly reliable port personnel continue to support Toyota’s operations through efficient customs processing and timely release of shipments.”

The BOC-POB celebrated its 65th founding year last August through an anniversary event where top locators and exporters were recognized for their support to the Port’s programs and activities.