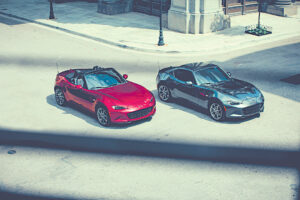 Envisioning a society wherein cars, people, and the planet can peacefully co-exist

TEN YEARS ago, I was wowed by my first glimpse of a Japanese car that showed off graceful lines and styling cues reminiscent of a Jaguar. It was the Mazda CX-5 compact SUV and it marked the local debut of the Hiroshima-based brand’s stunning Kodo-Soul of Motion design language.

But just as much as the sensuous lines that embodied Kodo, it was a spectacular shade of red paint that covered the car that caused my jaw to drop. The name of this paint color? Soul Red.

Kodo-Soul of Motion and Soul Red. If there’s one car company that’s deeply connected to its soul, it’s Mazda.

And it all began on August 10, 2012, when the Philippine distributor for Mazda, Bermaz Auto Philippines, Inc. (BAP) was incorporated. In the decade that followed, BAP brought in Mazda’s diverse lineup of head-turning and award-winning vehicles: the Mazda2, Mazda3, Mazda6, CX-3, CX-30, CX-5, CX-8, CX-9, MX-5, and BT-50. Imbued with the artful Kodo design language, premium Japanese craftsmanship, and fuel-efficient Skyactiv technology, the stylish vehicles enabled Mazda to carve inroads in the Philippine market.

Transcending the mere offering of premium products to Filipino customers, Mazda Philippines revolutionized after-sales service by introducing the country’s first all-inclusive ownership program—Yojin3 in 2013. This bundled a three-year warranty and three-year roadside assistance with three-year free periodic maintenance service. In 2020, this was extended to a five-year free service plan.

Aside from giving truly premium products and a high level of customer service, Mazda Philippines also nurtured a close relationship with several Mazda car clubs, fostering a feeling not just of camaraderie, but of family as well.

Ultimately, Mazda Philippines’ commitment expanded to sustainability with the inauguration of its net-zero facility in Cabuyao, Laguna – known as the Mazda Center of Excellence (MCOE) – in  2019.

Spanning a total area of 2.5 hectares, the warehouse and training facility is a testament to Mazda’s dedication to better serve the Philippine market. The facility can house 952 cars in its 12,269-sqm. covered vehicle depot prior to its deliver to dealerships. It generates its own electricity — up to 145,000 kWh annually — using its 270 solar panels. The MCOE can also harvest and store up to 135,000 liters of rainwater, which can be used to wash Mazda vehicles before delivery, and for general housekeeping.

The MCOE is just one part of Mazda Philippines’ alignment to the brand’s global long-term vision of Sustainable Zoom-Zoom 2030. This program has three interconnected pillars: People, Earth, and Society.

Internally, Mazda Philippines offers an environment for growth for its employees, who have now become partners for life. The partnership with the MFI Polytechnic Institute resulted in the graduation of 230 students, with some ending up working for Mazda Philippines, its dealer partners, and the automotive industry in general.

Looking to reduce its global carbon dioxide emissions from a “well-to-wheel” perspective, which considers emissions over the vehicle’s entire life cycle, Mazda is instituting a multi-solution approach wherein it will introduce appropriate powertrain options in consideration of each country’s energy policies and energy mix. This aims to reduce CO2 emissions to 50% of 2010 levels by 2030, with an eye on achieving a 90% reduction by 2050.

Recognizing that traditional fuel options still remain during the transition to a carbon-neutral society, Mazda Philippines inked a partnership with Pilipinas Shell as the first local carmaker to participate in a carbon-offset program. The program calculates a fleet’s overall fuel expenditure and its associated CO2 emissions. The emissions are compensated by carbon credits purchased by Pilipinas Shell for the customers from a global portfolio of nature-based projects. Last year, Mazda Philippines was able to offset 11 tons of carbon dioxide from its fleet’s overall fuel expenditure.

Since planting trees is the easiest method to sink carbon back into the earth, Mazda Philippines initiated a program with the Department of Environment and Natural Resources (DENR). Supported by a community in Siniloan, Laguna, they will plant 500 trees on one hectare of land in five years. This year, 200 trees have already been planted.

Going beyond carbon offsetting, Mazda Philippines has also entered into partnerships with the Katala Foundation for conservation efforts of the endangered Philippine Pangolin and with the Mt. Pulag National Park for the production of an informative and educational video that will help the community understand the fragility of the environment and the importance of its protection.

“Mazda has gone a long way since we started back in 2012. We could not have done it without the support of our dealer partners, our owners, the various Mazda clubs, and the media. You guys have always been part of it, and have always been there for us,” said Bermaz Auto Philippines President Steven Tan.

With such unwavering support, BAP and Mazda are creating a future in which people, the earth, and society can co-exist with cars – a celebration of driving and a strong and soulful connection with each other.