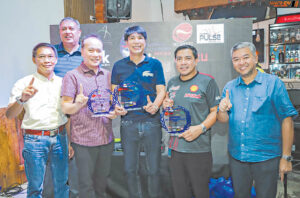 THE PHILIPPINE Rallycross (PHRX) Series honored the winners of the 2021 Rallycross Season during an awards night held at the Two Bott’s Resto Bar Co., in Southwoods Ecocentrum in Biñan, Laguna last August 11. The awarding ceremony took place belatedly after being postponed numerous times due to the pandemic.

The series of races was run over 12 rounds – mainly on a specially laid-out dirt track at the Clark Global City in Pampanga. While flagging off in March 2021, unexpected lockdowns and restrictions by the government’s COVID-19 Inter-Agency Task Force (IATF) for the Management of Emerging Infectious Diseases pushed the season to this year. The final round was completed last April.

The Novice Driver Award was given to Daniel Urian. Other special awards were handed out to participants.