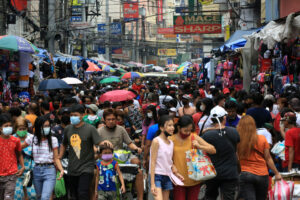 DAILY coronavirus infections in the Philippines could fall to fewer than 1,000 by mid-September, the OCTA Research Group said on Sunday.

The average daily cases in the past week had fallen to 2,959 as of Aug. 27, 15% lower than a week earlier, OCTA Research fellow Fredegusto P. David said in a report. The daily average hit its highest at 4,071 infections two weeks ago, he added.

The country would likely post fewer than 1,000 daily infections by mid-September and 500 infections by the end of next month, he said.

“The current average daily attack rate is 2.69, per 100,000, which is considered low,” Mr. David said. Filipinos are expected to hold more gatherings such as parties during the Christmas holidays.

The Philippines had experienced infection surges in the past holidays, with the highly infectious Omicron variant spreading locally as early as January this year.

“We are still living with COVID-19 even if cases seem low,” the World Health Organization (WHO) said in a Facebook post earlier this month.

It reminded people about the risk of catching the disease, which has killed millions and “can change at any time.” “Not all people with COVID-19 show symptoms. Don’t let cases rise again,” the WHO said. “Avoid getting infected and infecting others.”

Thousands of people are still dying from COVID-19 every week, the WHO said separately in a Facebook post on Aug. 9. “At least one of 10 people with COVID-19 get long-COVID.”

The WHO has been saying that unvaccinated people are 10 times more likely to get seriously ill with the coronavirus than those who have been vaccinated. “Getting vaccinated significantly reduces your chances of getting seriously ill or dying.”

The Philippine government had fully vaccinated 72.47 million people as of Aug. 27, while 17.82 million people have received booster shots. The state started a campaign in June to encourage more people to get boosters, as the government pushes face-to-face classes this school year.

Last week, millions of children in the Southeast Asian nation returned to schools for their first physical classes in two years.

The government failed to prepare for face-to-face classes while the country was still on lockdown, critics said, noting that students and teachers endured classroom shortages on the first day of school.

A group of teachers earlier said the Department of Education should have limited the number of students per class. Aside from the coronavirus, the monkeypox virus also threatens Filipinos.

The Department of Health this month said monkeypox should not become a reason for the government to delay or to stop the opening of classes.

It said safeguards were in place to keep students safe. The Philippines has recorded four cases of monkeypox, which spreads via contact and causes flu-like symptoms and pus-filled skin lesions.

New monkeypox cases have fallen in some major cities in the United States, CNBC reported.

“Although monkeypox cases are still increasing nationally, the speed of the outbreak appears to be slowing,” it said, citing an official at the US Centers for Disease Control and Prevention (CDC).

The US is watching this with cautious optimism, and hopeful that many of its harm-reduction messages and vaccines were getting out there and working, CNBC said, citing CDC Director Rochelle Paula Walensky.

The number of monkeypox cases reported globally declined by 21% two weeks ago, Reuters reported, citing an epidemiological report by the WHO.

“The decrease in case numbers may potentially signal that the outbreak is declining in the European region,” it said Aug. 25.

Still, almost two-dozen countries have experienced a rise in weekly monkeypox cases, with the highest increase reported in the US, it said. More than 34% of infected people globally were in the US.