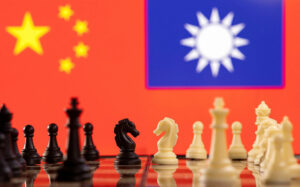 TAIPEI — Taiwan will next year begin deploying drone defense systems on its offshore islands, the defense ministry said, after footage emerged of Taiwanese soldiers throwing stones at a Chinese drone that buzzed a guard post near China’s coast.

Taiwan has complained of repeated Chinese drone incursions near its offshore islands as part of China’s war games and drills after US House Speaker Nancy Pelosi’s visit to Taipei this month, which infuriated Beijing.

China claims democratically governed Taiwan as its own territory, despite the strong objections of the government in Taipei.

The brief video clip, circulated first on Chinese social media before being picked up by Taiwanese media, shows two soldiers throwing stones at a drone that got near their guard post.

In a statement late Wednesday, the defense command of Kinmen, a group of Taiwan-controlled islands that sit opposite China’s Xiamen and Quanzhou cities, said the incident occurred on Aug. 16 on Erdan islet, and confirmed the soldiers had thrown stones to see off what it called a civilian drone.

Taiwan’s defense ministry said in a separate statement that starting next year it will deploy anti-drone systems, which will first be placed on the smaller islands.

“Officers and soldiers at all levels will continue to implement vigilance in accordance with the principle of “not escalating conflicts or causing disputes,” it added.

China has not commented on the footage, which has received millions of views on Chinese social media with users making fun of it.

It has also triggered heated discussion in Taiwan, with some social media users calling the incident a “humiliation” for the island’s armed forces and urging the defense ministry to step up its countermeasures to the increasingly frequent drone incursions.

The Kinmen defense command said the footage was another example of China’s “cognitive warfare” against Taiwan and an attempt to “denigrate” its armed forces.

Wang Ting-yu, a senior lawmaker of Taiwan’s ruling Democratic Progressive Party, described the incident as “very serious” and questioned why Taiwan’s defense ministry did not respond to the incursion.

“The drone was flying on top of our soldiers on guard but there’s zero response,” he said. “If you just let them come and go freely, this was negligence of duty.”

Taiwan has controlled Kinmen, along with the Matsu islands further up China’s coast, since the defeated Republic of China government fled to Taipei after losing a civil war with Mao Zedong’s Communists in 1949.

At its closest point, Chinese-controlled territory is only a few hundred meters from Kinmen. — Reuters