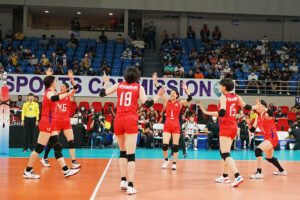 THERE was no sense of braggadocio when powerful Japanese outside hitter Yuki Nishikawa announced they would rule the Asian Volleyball Cup the Philippines is currently hosting at the PhilSports Arena.

It was more of a promise.

The Nippon, who fielded in only four from their 39-player pool that finished seventh in this year’s Volleyball Nations League, was all business in dominating their bracket where they unmasked contenders Thailand and Chinese Taipei to mere pretenders with emphatic straight-set wins.

And on this quiet afternoon, the Japanese did not show signs they will slow down and mercilessly overpowered a tall team from the Land Down Under with plenty to spare.

Ms. Nishikawa was in the center of that destructive storm as she presided over the massacre by unleashing a masterful 18-point performance. “We only have little time to prepare for this competition, but we did well and I’m so happy for it,” she added.

Mizuki Tanaka joined in the bloodletting and scattered 16 hits.

The group stage domination catapulted Japan, which won the last two Asian Championships in 2017 in Biñan, Laguna and in 2019 in Seoul, Korea, straight to the quarterfinals where it will clash with Pool A’s No. 4 team, which could be one among the host nation, Iran or South Korea.

It also pushed them closer to its first title in the seventh edition of this biennial meet after its league-best silver medal finish in Nakhon Ratchasima, Thailand four years ago.

There was nothing the Aussies could do and ended up with a 0-3 record that set them up against the mighty Chinese, the Pool A winners, in the quarters.