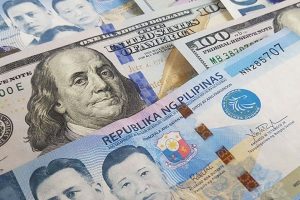 THE PESO rebounded versus the dollar on Tuesday on the back of the government’s ongoing retail bond offering. — BW FILE PHOTO

THE PESO rebounded against the greenback on Tuesday on preference for the local unit amid the government’s retail Treasury bond (RTB) sale and ahead of a likely weaker US durable goods report.

The local unit closed at P56.07 per dollar on Tuesday, gaining 14 centavos from its P56.21 finish on Monday, data from the Bankers Association of the Philippines showed.

The peso opened Tuesday’s session weaker at P56.25 per dollar. Its worst showing was at P56.26, while its strongest was at P56.05 against the greenback.

The peso strengthened versus the dollar as investors preferred the local unit as the offer period for the government’s RTBs began on Tuesday, Rizal Commercial Banking Corp. Chief Economist Michael L. Ricafort said in a Viber message, as this “could entail some foreign buyers/investors and could siphon off hundreds of billions of excess liquidity from the financial system, thereby partly triggering some healthy profit taking in some parts of the local financial markets after hefty gains recently, as some investors shift some of their funds to RTB investments with relatively higher yields compared to recent years.”

The government on Tuesday raised an initial P162.72 billion from the price-setting auction for its offer of 5.5-year retail bonds as tenders reached P225.32 billion, or more than seven times the P30-billion plan.

The retail bonds fetched a coupon rate of 5.75%, higher than the 4.875% set for the five-year RTBs offered in March.

Mr. Ricafort said the peso rose despite a stronger US dollar, which is due to the possible continuation of aggressive US Federal Reserve rate hikes as inflation in the world’s largest economy remains elevated.

The dollar has regained strength “as markets anticipate the yearly Fed monetary policy symposium/Jackson Hole Forum in Wyoming (Aug. 25-27) on possible new leads on the pace of Fed rate hikes/hawkish Fed in view of the need to further bring down still elevated US inflation; as well as the recent increase in US Treasury yields, with the benchmark 10-year US Treasury yield at new 1-month highs recently, breaching above 3%, now at 3.01%, amid hawkish signals from some Fed officials recently,” he added.

Meanwhile, a trader said “the peso appreciated ahead of potentially weaker US durable goods report for July 2022.”

“The local currency might weaken anew ahead of the second release of the US second-quarter GDP (gross domestic product) report [on Wednesday],” the trader added.