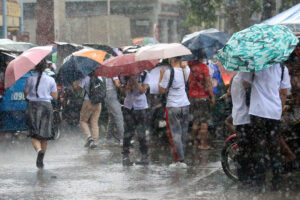 MORE than 500 people in the Philippines were evacuated on Tuesday, according to the state disaster agency, as Tropical Storm Ma-On, locally named Florita, pounded Northern Luzon.

President Ferdinand R. Marcos, Jr. suspended government work and classes in public schools in the capital region and nearby provinces on Tuesday afternoon until Wednesday.

Ma-On, the Philippines’ sixth storm this year, made landfall in Maconacon, Isabela province at 10:30 a.m. on Monday, according to the state weather agency, which warned of widespread flooding and landslides in the province and nearby Zambales, Tarlac, Bataan and Pampanga.

Also covered by the work and class suspensions were the provinces of Cavite, Laguna, Rizal, Bulacan, Zambales and Bataan, the presidential palace said in a statement.

“The same course of action for private schools and offices is left to the discretion of their respective heads,” it added.

Agencies that deliver basic, health and other vital services and deal with disasters would remain open, according to the palace circular.

Ma-On was packing maximum sustained winds of 110 kilometers per hour (kph) near the center and up to 150 kph gusts, the weather bureau said.

At 11 a.m. on Tuesday, it raised Tropical Cyclone Wind Signal No. 3 over the northern areas of Ilocos Norte, Apayao, the southern portion of Babuyan Islands, mainland Cagayan, and the northeastern part of Isabela.

Ma-On was expected to move northwestward and cross the northern portion of Isabela and mainland Cagayan, emerge over the Babuyan Channel on Tuesday night and exit the country on Wednesday morning.

Mark Cashean E. Timbal, spokesman for the National Disaster Risk Reduction and Management Council (NDRRMC), said they were monitoring areas in the region affected by the magnitude 7 earthquake last month.

“We are focusing on landslide- and flood-prone areas that may be hit by the typhoon in northern Luzon,” he told a televised news briefing in Filipino. “There’s a high chance of landslides in these areas.”

The agency had more than P800 million in standby funds for typhoon victims, he said. About 480,000 food packs were available, while face masks were also ready to be given out to evacuees.

The Department of Social Welfare and Development, which was on red alert, had P1.7 billion in standby funds, aside from basic goods for those affected by the storm.

SCHOOLS CANCELED
A total of 162 classes were canceled in several regions in Luzon, while work in about 60 cities were suspended.

Three roads in the Bicol region and a bridge in Cagayan Valley were not passable, the NDRRMC said.

To prevent coronavirus transmission, only one family should use one modular tent and two related families should use one classroom at evacuation sites, Mr. Timbal said.

Schools in the Philippines opened on Monday, and the government has ordered both public and private schools to start full face-to-tace classes by November.

Filipino students endured heavy traffic on their way to cramped classrooms on the first day of school.

In Macabebe, Pampanga in the country’s north, classes continued while students’ feet were submerged in dirty ankle-deep floodwater, according to news reports.

The government does not yet have a policy on building climate-resilient classrooms, said Terry L. Ridon, convenor of InfraWatch PH.

The Philippines is 91,000 classrooms short this school year, according to data from the Department of Education, which is headed by Vice-President Sara Duterte-Carpio.

About P86.9 billion was set aside in the 2023 budget for classrooms, the agency said earlier.

Ms. Carpio on Monday said the lack of classrooms could not be an excuse to delay classes.

The United Nations Children’s Fund this week said prolonged school closures, along with poor health risk mitigation and household income shocks had the biggest impact on learning poverty. Many Filipino children fail to read and understand a simple text by age 10..”

The Philippines lies along the typhoon belt in the Pacific and experiences about 20 typhoons each year. It also lies in the so-called Pacific “Ring of Fire,” a belt of volcanoes around the Pacific Ocean where most of the world’s earthquakes strike. — Norman P. Aquino and Kyle Aristophere T. Atienza