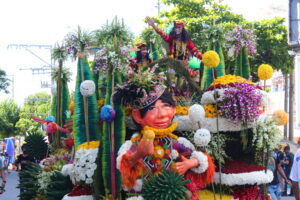 AFTER two years of virtual events, the City of Davao’s Kadayawan Festival has returned to face-to-face celebrations on its 37th year.

The Kadayawan Festival is a celebration of thanksgiving for a bountiful harvest. The festivities are held every third week of August and highlight the 11 tribes of Davao.

The festival was called the Apo Duwaling Festival in the 1980s, named after Davao’s three icons — Mount Apo (the highest mountain in the Philippines at 2,956 meters above sea level), the durian fruit, and the waling-waling orchid.

In 1988, it was given a new name: Kadayawan. “Kadayawan” is derived from the greeting “madayaw” (from the Davaoeño word “dayaw” which means “good” or “beautiful”).

This year’s Kadayawan festival was held from Aug. 15 to 21.

BusinessWorld was invited to experience the tail-end of the festivities last weekend.

THE KADAYAWAN VILLAGE
The setting up of the Kadayawan Tribal Village at the Ramon Magsaysay Park started in 2017 as a way of showcasing the culture of the 11 ethnolinguistic tribes of Davao. They are the Ata, Maguindanaon, Matigsalug, Bagobo Klata, Maranao, Obo Manuvu, Bagobo-Tagabawa, Tasug, Sama, Iranun, and Kagan.

The village is a cultural hub during the festival, and where houses of the Lumad and Moro groups are reconstructed displaying the architecture from the 11 indigenous and Moro groups. Visitors are welcome to explore the inside of the houses and interact with the communities.

Aside from the houses, the tribes’ unique textiles, clothing, and tribal delicacies are showcased. Guests are welcome to put on their tribal attire for a donation of any amount.

Members of the tribes also perform their music and dances.

INDAK-INDAK SA KADALAN
The Indak-indak sa Kadalan is the annual street dance competition which culminates at San Pedro Square in front of the Davao City Hall. The event’s name comes from the words “indak,” which means “to dance,” and “kadalan,” which means “street.”

Every participating group has to create a free interpretation of a legend, fable, or a story relative to the 11 tribes in a performance that lasts not more than eight minutes. The competition has an open category and school-based section.

The grand winners brought home P1 million and a trophy, with each member receiving a medal.

AGONG KULITANGAN
The Agong Kulintangan is a new music competition that was introduced just this year. It features the region’s musical instruments such as the agong, a large hanging kettle gong, and the kulintang, a row of small gongs laid out horizontally.

Seven ensemble groups joined the inaugural competition. Aside from the playing of instruments, some groups incorporated dances and entertaining challenges such as playing the kulintang blindfolded.

The Kagan Group was named the first grand champion of the competition and took home P50,000; the Kagan Kulintang Culture Ensemble and Mamayug sa Magindanao Ensemble finished in second and third place, respectively.

“It’s really good that we’re having this face to face now, you can really feel the Kadayawan vibe, masaya (it’s fun),” Department of Tourism XI regional director RD Tanya Rabat-Tan told reporters. “The festival is spearheaded by the LGU of Davao. We (the tourism department) are supporting in terms of promoting the festival,” she explained.

She said that this year’s inaugural Agong Kulintangan competition is sponsored by the Department of Tourism Region XI. “We’d like to bring it back next year,” she said. “Hopefully, we can draw more tourists next year.”

FLIGHTS TO DAVAO
To stimulate travel to the region, Cebu Pacific has an ongoing seat sale that is exclusive for the Davao region that runs until Aug. 26. Rates are P88 for a one-way base fare, for travel until Jan. 31, 2023.

“We want to give every Juan convenient and affordable air travel, that is why we encourage families, friends, and even solo backpackers to take advantage of this promo and fly to Davao. Likewise, those from Davao can also book to other destinations in the country, like Bohol, Cebu, Iloilo, and Zamboanga,” Carmina Romero, Corporate Communications Director of Cebu Pacific, said in a statement.