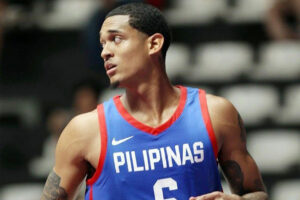 THERE’S much excitement in the air in the Gilas Pilipinas camp right before Jordan Clarkson and 12 others fly to Beirut for the tough road outing against Lebanon in the FIBA World Cup Asian Qualifiers.

“The energy is very high,” Samahang Basketbol ng Pilipinas executive director and spokesman Sonny Barrios shared even as he announced the composition of the contingent during yesterday’s PSA Forum.

Utah Jazz guard Mr. Clarkson provides his NBA-caliber skills to a new-look Gilas crew out for redemption in the Aug. 25 match versus the powerhouse Cedars after a string of disappointing campaigns.

The 13, from whom the Final 12 will be eventually  tapped, are taking the 12:15 a.m. Tuesday flight for the Lebanese capital.

Mr. Barrios noted that Mr. Clarkson, who previously suited up in the 2018 Asian Games, is blending well with the current crop of national mainstays.

“…Jordan adapts very well with his teammates, very comfortable siya, and he can relate very much to the three senior coaches,” he said, referring to head coach Chot Reyes and assistants Tim Cone and Jong Uichico.

This group, according to Mr. Barrios, is expected to utilize “fast ball movement and patient shot selection” while putting much premium on  defense.

Meanwhile, Mr. Aguilar is joining the trip after coming out of health and safety protocols last week and missing a week’s worth of practices. The 6-foot-9 Ginebra star attended the session last Sunday and had his first full practice with the team yesterday morning.

Gilas is up for a tenacious fight against a Lebanese side parading the core of its silver medal-winning team in the FIBA Asia Cup led by MVP Wael Arakji in the away game on Thursday night (early Friday in Manila). — Olmin Leyba