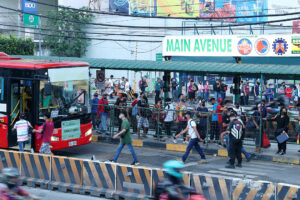 THE DEPARTMENT of Transportation (DoTr) is being urged to consider the privatization of the bus system along Epifanio delos Santos Avenue (EDSA), as well as other urban rail systems to help ease the burden of commuters.

Under the hybrid mode, the government will provide the infrastructure, while a private concessionaire will operate the service and maintain the facilities under an operate and maintenance (O&M) concession.

“MAP has offered to work with the DoTr and other private sector stakeholders in preparing the terms of reference for the bidding and award of the concessions to ensure a level playing field for all,” the business group said in a statement on Monday.

The recommendation was made by the MAP in a letter sent to Transportation Secretary Jaime J. Bautista.

Also, the MAP said DoTr should focus on a total system upgrade of the EDSA bus system, where commuters face long lines during rush hour.

“The upgrade will complete the EDSA busway, a work-in-progress, scale up its capacity and raise it to the level of global standards to optimize the system to achieve its full potential as a cost-effective, efficient, high-capacity urban mass public transport system commensurate to the high-commuter density of EDSA, and, as well, to ensure long-term sustainability to ably serve its role as the complementary mass transport to the MRT-3,” the business group said.

They asked the DoTr to augment vehicles in the EDSA Bus Carousel, PNR commuter lines, MRT-3 and LRT Lines 1 and 2, to improve the commuters’ experience.

“These lines should have the shortest waiting time (and therefore the shortest queues) for commuters during rush hours,” the MAP said.

Currently, commuters have to endure long lines at EDSA Bus Carousel stations due to the lack of buses. Long queues are also usually seen at the MRT and LRT stations during rush hour due to the volume of commuters.

To upgrade the EDSA busway, the MAP proposed increasing the capacity of station platforms, building more stations, and expediting the construction of donated busway station footbridges.

The DoTr should also address the chokepoints along the EDSA Bus Carousel, provide ease of bus-to-train connectivity, and establish similar busways in commuter-heavy areas in the National Capital Region, they said.

The MAP urged the DoTr to decongest the Ayala station and McKinley Road by providing an alternate route from Bonifacio Global City to the Buendia station, as well as introduce electric commuter buses.

The business group said President Ferdinand R. Marcos, Jr. should issue an executive order to “enjoin all relevant agencies to comply with the National Transport Plan (NTP) of 2017, particularly to prioritize people mobility through public transportation and active mobility, such as walking and biking, by prioritizing the allocation of road space for such purposes.”

“Currently, busway station platforms and sidewalks are very narrow and grossly inadequate as the space required for them were allocated instead to augment private vehicle lanes pursuant to misguided car-oriented road management policy,” the MAP said. — R.M.D.Ochave