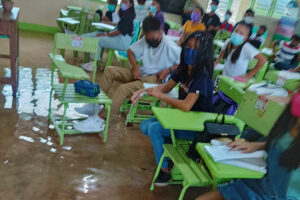 CLASSES in some northern parts of the country were suspended Monday, the first day of school reopening for in-person learning, as typhoon Florita intensified and tropical cyclone wind signals were raised by the state weather agency.

Work in both public and private establishments were also canceled in some towns and cities effective Monday afternoon, based on social media announcements by local governments, including in the provinces of Cagayan and Isabela where tropical storm Florita could possibly make landfall by Tuesday afternoon.

Florita was located 155 kilometers (km) east of Casiguran, Aurora as of Monday afternoon, based on the 5 p.m. bulletin of the Philippine Atmospheric, Geophysical, and Astronomical Services Administration (PAGASA).

It was moving in a west-southwest direction with maximum sustained winds of 75 km per hour (km/h) near the center and gustiness of up to 90 km/h.

The tropical storm is also being enhanced by the southwest monsoon, according to PAGASA.

“There is a potential for slight weakening as Florita crosses the northern portion of northern Luzon due to frictional effects of the rugged terrain, but the tropical cyclone will likely remain a tropical storm throughout the passage over land,” it said.

The weather agency also warned against flooding and landslides.

Some of the areas in the storm’s path are those affected by the magnitude 7 earthquake that struck northern Luzon on July 27, which triggered landslides.

Regional and provincial disaster management teams have been placed on high alert for preemptive evacuation and emergency response operations.

Leon DG Rafael, Jr., disaster risk reduction and management council director for Cagayan Valley, also called on local governments not affected by the typhoon to organize teams who could assist in response operations.

“Winds may reach gale-force in strength in any of the areas where wind signal no. 2 is hoisted throughout the passage of tropical storm Florita,” the weather agency said.