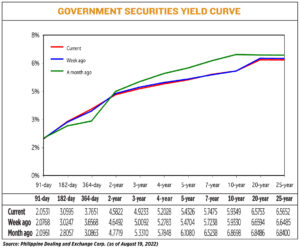 YIELDS on government securities (GS) were mixed last week after the Treasury fully awarded auction offerings and the central bank hiked policy rates for the fourth time this year.

GS yields, which move opposite to prices, fell by 2.62 basis points (bps) on average week on week, based on the PHP Bloomberg Valuation (BVAL) Service Reference Rates as of Aug. 19, published on the Philippine Dealing System’s website.

“The short end [of the curve] remained elevated as inflation still remains an issue even though we could be nearing the peak,” Security Bank Corp. Chief Investment Officer for Trust and Asset Management Group Noel S. Reyes said in an e-mail.

A bond trader said in an e-mail that the GS movement last week was likely influenced by the Treasury’s auction results for its offer of Treasury bills (T-bills) and Treasury bonds (T-bonds).

“Given the [Treasury’s] announcement of 5.5-year retail bond issuance [last week], I think we can expect the support for the long-end to remain in the medium term. There will be some uncertainty in the short end while the market waits for the retail bond to be priced and no doubt that market participants will closely monitor the reception of the retail bond,” the bond trader said.

The Bureau of the Treasury (BTr) fully awarded its reissued 10-year T-bonds which raised P35 billion as planned, with a remaining life of nine years and 10 months. Total bids for the offer reached P128.83 billion.

“The action of the central bank was well anticipated already given that the 50-bp hike had been pre-communicated by the governor and hence there was no impact to yields that much. The main focus remained how the yield curve should move forward as it continues to remain flat,” Mr. Reyes said separately.

As expected by economists, the central bank beefed up its overnight reverse repurchase rate by 50 bps to 3.75%. Likewise, rates on the overnight deposit and lending facilities were raised to 3.25% and 4.25%, accordingly.

So far, the BSP has raised a total of 175 bps this year to rein in surging inflation.

“For [this] week, I expect some uncertainty heading towards the Tuesday pricing of the retail bond but the yields should stabilize fairly quickly after the market re-aligns itself with whatever the auction result will be,” the bond trader said.

The Treasury is eyeing to borrow at least P30 billion in its first 5.5-year retail Treasury bond issuance under the Marcos administration.

For Mr. Reyes, yields will “steepen and consolidate from the belly to 10 years as mentioned above with profit taking in mind. They could move with a 5 bps to 15 bps range.” — A. O. A. Tirona