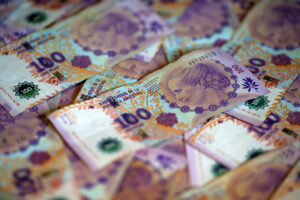 BUENOS AIRES — Some women wore black funeral attire and sported flower crowns. Other people in the procession in Buenos Aires carried a gigantic coffin. But this funeral procession in the Argentine capital was not honoring a person.

Instead it was to mourn the “death” of the wages of Argentine workers in a country where inflation is expected to hit 90% by the end of this year, eating up workers’ purchasing power despite years of government attempts to curb price increases.

“The situation for the workers is devastating. Before the middle of the month, we don’t have any more salary, it’s not enough,” Melisa Gargarello, a representative of the Front of Organizations in Struggle (FOL), the protest’s organizer, told Reuters.

One protester carried a “clinical history” for Argentine wages, a chart showing how inflation has eaten up the value of paychecks.

While much of the world is battling high single-digit inflation this year, Argentina’s struggles are in a different category.

“The paycheck has died” read a banner in the symbolic procession, which toured the main streets of Argentina’s capital and ended in front of the Presidential Palace. The flower crowns worn by women carried the message “RIP the minimum wage.”

The country’s official monthly minimum wage stands at 45,540 Argentine pesos ($334) while a basic food basket for a family of two adults and two children costs more than twice that amount at 111,298 pesos ($817), according to the national statistics institute INDEC.

Years of political efforts to curb inflation have done little to abate price increases, and in July the country registered its highest inflation rate in 20 years.

The latest effort involves the appointment of a new economy minister, Sergio Massa, who has been granted expanded powers to try to tame inflation. Argentines have dubbed him a “superminister.”

“Today we are holding a symbolic funeral for wages, which we have to say expresses the situation that all workers in Argentina are experiencing,” said FOL’s Maximiliano Maita. — Reuters