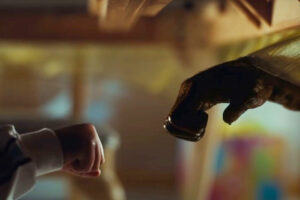 TWO siblings who run a California horse ranch discover something wonderful and sinister in the sky, and the owner of an adjacent theme park tries to profit from the mysterious, otherworldly phenomenon. Directed by Jordan Peele, the film stars Keke Palmer, Daniel Kaluuya, and Steven Yeun. Variety’s Owen Gleiberman writes, “Jordan Peele’s Nope is a tantalizingly creepy mixed bag of a sci-fi thriller. It’s a movie that taps into our fear and awe of UFOs, and for a while it holds us in a shivery spell. It picks the audience up and carries it along, feeding off spectral hints of the otherworldly.” Film review aggregate site Rotten Tomatoes’ Tomatometer gives it a score of 82% and an audience score of 68%.

FOR best friends Becky and Hunter, life is all about conquering their fears and pushing their limits. But after they climb 2,000 feet to the top of a remote, abandoned radio tower, they find themselves stranded with no way down. Now Becky and Hunter’s expert climbing skills will be put to the test as they desperately fight to survive the elements, and deal with a lack of supplies and vertigo-inducing heights. Directed by Scott Mann, the film stars Grace Caroline Currey, Virginia Gardner, Jeffrey Dean Morgan, Mason Gooding, Julia Pace Mitchell, and Jasper Cole Director. Rolling Stone’s K. Austin Collins writes, “Fall is a straightforward survival thriller with just enough personality to glue you to your seat. The situation is ridiculous. Friend wants to help friend grab life by the horns and figures only a free-climb up the innards of an abandoned tower, planted dead-center in the middle of a desert, with little in the way of fellow humans, or chances of aid, or phone reception, will get the job done. Hilarity necessarily ensues. Fall knows what we want to see. It gives us the quaking bolts as weight gets applied to the tower’s ladders for the first time since probably the Kennedy era, heightened bouts of wind, and aerial shots that make survival seem impossible.” Film review aggregate site Rotten Tomatoes’ Tomatometer gives it a score of 73% and an audience score of 77%.