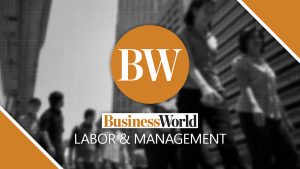 This week, a janitor reported scribbling in a toilet cubicle which contained a death threat against the human resource (HR) department head. The threat, addressed to the department head, was worded as follows: “Your days are numbered. Beware!” As the manager in charge of janitorial services, I took a photo of the graffiti and instructed the janitor to keep it secret. We locked the cubicle until the completion of an investigation. Management has no clue who might have done it, but suspects the employees’ union, which could be playing mind games during the new collective bargaining agreement (CBA) negotiations, which have run to an eighth meeting. What would you advise our management? — Lone Ranger.

I wrote about this topic in this space on May 25, 2018 in a column, “Death threats from sacked workers? Here’s the cure.” That article is about 18 dismissed workers who were suspected of having issued threats. The situation mirrors your current predicament with a union that could be taking a hardball approach in CBA negotiations.

Read that article online and connect the dots with the advice I’m about to give here.

Closing the cubicle is a good step. But don’t be complacent. Even if the janitor has been told to keep the incident a secret, there’s no guarantee rumors won’t spread. You can’t count on his loyalty especially if he’s employed by a manpower agency or if he turns out to be a union sympathizer.

Regardless of the identity of the perpetrator or perpetrators, the HR head and the management members of the CBA panel must take the matter seriously. Your suspicions are based on sound logic. The union may be resorting to brinkmanship to unsettle management into fast-tracking the negotiations and extend a solid counter-offer.

MANAGEMENT SOLUTIONS
CBA negotiation is often described as a “love-hate” relationship between labor and management. When this relationship involves death threats, it becomes a far more complex issue. However, management need not to be intimidated. It must remain sober and consider the following steps:

One, take the matter seriously without being emotional. Don’t be fearful but be extra careful. Otherwise, management could turn paranoid and not exercise its best judgment during negotiations. It should still perform its daily tasks, while changing its routines, like reporting early to work coming in late. Management schedule must be unpredictable, with working remotely an option.

Two, inform top management and the security manager. They’re the best authority to decide on a safety and security protocol. The measures might include providing your HR head a security detail, an armored vehicle, and a bullet-proof vest. It may not be wise to issue firearms to people not used to them.

Three, inform the union representatives. Do this face-to-face and shortly before you adjourn a negotiation session. This should be the last item on the agenda. Be brief. Don’t accuse anyone. Simply let them know that management is implementing security measures within the office or factory premises and the vicinity. The union could come to realize that its threat has backfired.

Four, file a report with the police. Have it on a police blotter. Cite the circumstances surrounding the CBA negotiations. Get a police report for the company’s records, but keep the matter confidential. Think hard before reporting to the police the names of union negotiating panel members or any union official.

You don’t want to complicate the CBA negotiations should the union dig up a copy of the blotter which is a public record. Many union officials will not take it sitting down if they discover that management has linked them to death threats.

Last, negotiate with the union as if there is no death threat. You want management to present a brave front when negotiating. If you show any sign of weakness, chances are the union will know the threats got to you. Go ahead with management’s original proposal and take it from there.

GOOD-FAITH BARGAINING
A successful negotiation of a new CBA that mutually satisfies both labor and management requires good faith in bargaining. The trouble is that management can’t dictate terms to the union. The union can do almost anything short of filing a notice of strike. Just the same, even without an impending strike, management can only act on things it can control.

Good faith enhances management credibility, which includes a sincere desire to agree to a new CBA that is within the capacity of the organization to pay. While some trade unions can resort to dirty tactics, management shouldn’t do the same thing. Never leave home without good faith as it attracts positivity, even when other people are unwilling or incapable of doing good.

Have a chat with Rey Elbo via Facebook, LinkedIn or Twitter or send your questions to elbonomics@gmail.com or via https://reyelbo.com