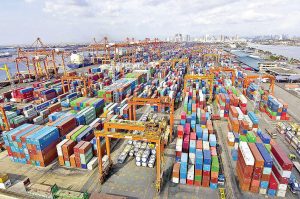 THE economy’s 7.8% expansion in the first half, driven by investment and consumer spending, keeps it on pace for 6-7% growth for the full year even amid a global slowdown, First Metro Investment Corp. (FMIC) and the University of Asia and the Pacific (UA&P) said.

“The continuation of easing of alert levels, removal of tourism restrictions, return to work and school, among other initiatives, should support the economy which shows gradual recovery with respect to pre-pandemic performance,” the two institutions’ economists said in the August edition of their economic briefing, known as the Market Call.

Slower growth is expected in the second half given the absence of election spending and the likelihood of inflation exceeding 6% for the rest of the year, they said.

“While crude oil prices have stuck below $100 (per) barrel, the upward price effect on other consumer items since its earlier sharp runup this year may linger on for another three to four months, and so headline inflation will likely remain above 6% for most of the second half,” the economists said.

The 6% estimate is higher than the FMIC and UA&P’s earlier inflation forecast of 5-5.2% this year and the central bank’s 2-4% target.

The peso is also likely to weaken past P55 amid continued pressure for the remainder of the year, regardless of the impact of OFW remittances in the fourth quarter, as the Federal Reserve is expected to remain hawkish on rates to contain inflation.

The addition of 528,000 to the ranks of the employed in June and the positive impact on income of the peso’s depreciation “should offset likely fragility of inflation-beaten consumers” and drive further consumption-driven growth.

“The peso depreciated by 4.3% in July, but that means more income in the pockets of OFW (overseas Filipino workers) families, BPO (business process outsourcing) workers, exporters, and their suppliers, with an estimated 70 million beneficiaries,” FMIC and UA&P said.

“While we expect a slight slowdown in National Government spending, we do not think it will matter much, since the private sector has stepped up with close to 1 million jobs added in May and June. The National Government still has P1 trillion in unused (budget funds) for the second half while tax revenue will likely continue to outperform,” it added.

Healthy growth in investment spending is also expected to be maintained “as firms strive to catch up capacity to the unexpectedly faster rise in spending.”

However, the slight easing of manufacturing activity in July, as reflected in the Purchasing Managers’ Index (PMI) reading of 50.8 from 53.8 in June, indicates the presence of factors that may hinder economic activity.

Its assessment of the S&P Global Philippines Manufacturing PMI is that “while the modest expansion (of 50.8) showed up in employment gains, supply side issues persisted. Some of the drivers include global uncertainties, weakened client demand from foreign markets, logistical challenges, and port congestion.”

The PMI is a leading indicator of economic activity as raw material orders by the manufacturing sector are considered a proxy for the industry’s forecast for future demand. A reading above 50 signals an expansion in manufacturing activity, while a reading below 50 signals a decline.

The economy in the second half needs to grow by 5.2% to hit the lower end of the 2022 growth target of 6.5%, according to the Marcos administration. — Diego Gabriel C. Robles