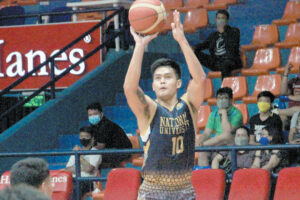 NATIONAL University (NU) fended off University of Perpetual Help System DALTA, 87-82, and completed a sweep of Group A at the close of its Filoil EcoOil Preseason Cup elimination campaign on Thursday at the Filoil EcoOil Centre in San Juan.

Team captain John Lloyd Clemente dropped 21 points in 21 minutes to banner five cagers in twin digits for the Bulldogs, who clinched the top seeding in Group A entering the quarterfinals.

Germy Mahinay (12), PJ Palacielo (12), Steve Nash Enriquez (11) and Michael John Malonzo (10) were also instrumental for NU, which needed to claw back from an 80-71 deficit early in the fourth quarter.

The Bulldogs, whose unbeaten campaign included a big win over reigning UAAP champion University of the Philippines (UP), uncorked a 16-2 closeout from there on highlighted by Mr. Clemente’s insurance free throws in the waning seconds.

The No. 1 NU will face the still-to-be determined No. 4 team from Group B in a crossover knockout playoffs.

Joining the Bulldogs as Group A quarterfinalists were UP, Adamson and College of St. Benilde with two teams yet to catch the last bus in Group B led by La Salle and Lyceum.

Later, San Sebastian (3-3) bolstered its bid for one of those last two tickets with a 69-64 win over Letran (3-3) to gain a share of fourth place. Far Eastern University has inside track so far at No. 3 with a 4-3 card. — John Bryan Ulanday