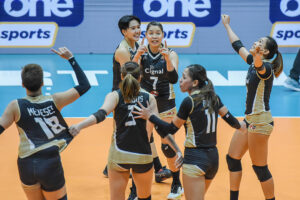 CIGNAL and Creamline stake their unbeaten slates as they tangle when the Premier Volleyball League Invitational Conference goes out of town at the Sta. Rosa Sports Complex in Laguna today.

The HD Spikers have roared to a mighty 3-0 start while the Cool Smashers hurdled their first two assignments.

But after their 5:30 p.m. showdown, only one will remain unscathed and on top.

It was a long-anticipated match between the league’s top teams as the two were supposed to meet in the Open Conference finals early this year after sweeping their respective groups.

But some ill twists of fate denied the much-anticipated duel from ever materializing.

Now they have a chance to prove which team is superior.

“Cignal is one of the strongest teams in the conference, that’s why we must prepare,”said Creamline coach Sherwin Meneses.

The Cool Smashers have been drawing strength from version of the Fantastic Four of skipper Alyssa Valdez, setter Jia de Guzman and the power-hitting duo of Tots Carlos and Jema Galanza.

That is why Cignal mentor Shaq delos Santos has constantly pleaded to his charges to keep their laser-like focus to the game.

“I don’t consider our team as one of the strongest. But we have to stay focused on every game. Despite our victories, there’s still a lot to improve in our system, it’s a process,” said Mr. Delos Santos.

Ces Molina has been the most consistent of all as she averaged around 18 points a game.

Setter Gel Cayuna is expected to be activated again after she was rested in Cignal’s 25-23, 25-16, 25-18 demolition of Chery Tiggo Saturday.