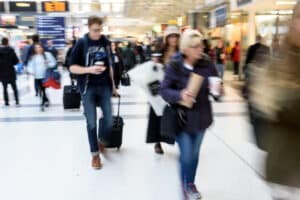 New research from has revealed commuting is the biggest barrier to the return to office life post-Covid, with only 8% of Brits now prepared to travel more than an hour to get to work.

In the short term, workers are set to follow Government guidance by continuing to work from home, in the longer-term, six in ten want an office that is closer to home and an even greater proportion say that a more conveniently located office is a must-have for their next job move.

A reluctance to commute is a key driver in accelerating the demand for office space in smaller towns and cities post-Covid. IWG, the flexible workspace provider who commissioned the research, has reported a 22% jump in sales between June and August this year in the UK, fuelled by buoyant demand in the suburbs. It’s a different situation in London city centre locations however, where the company saw sales decline by 40% over the same period, reinforcing that workers are still hesitant to travel far from their front door, and that a fundamental shift in where offices will be based in the future is about to take place.

Londoners are leading the way in calling for a reduction in their commute to work, with 70% wanting to cut travel times. This is having a direct impact on an increasing demand for flexible workspaces in M25 commuter hotspots. In the last three months, IWG’s centres in Uxbridge and Luton have both seen a 74% increase in demand for flexible office space, followed by Croydon and Harrow.

A similar shift towards the suburbs can also be seen in the North, where demand for spaces on the outskirts of Manchester has doubled compared to locations in the city centre (37% compared to 18%). The biggest increase in demand across the UK has been in Plymouth with a 114% increase.

Mark Dixon, CEO and Founder of IWG said: “The changes we’ve experienced in how and where we work are here to stay. As we have seen during the pandemic, people have enjoyed working from home and have tasted the relative luxury of not having to commute. This is unsurprising given a vast array of sources, from the Office for National Statistics to Princeton University, tell us continually that commuting is the least favourite part of the working day for many.”

Dixon continued: “Whilst there is undoubtedly an aversion to travelling far to the office, when guidance allows, companies still need to have offices that employees can drop in for social interaction, meetings and business reviews. Put very simply, you don’t want to meet people in your front room or bedroom.”

Businesses looking to meet employees’ new expectations should note that for a fifth (21%), three is the magic number of days per week that they would like to work from the office. Almost half (46%) even say they would quit their job if they were asked to go back to the office five days per week.

Strong demand for a flexible working week is understandable, especially when UK office workers could be saving an estimated £21m on travel per week collectively by only going into the office for three days compared to the traditional five. They would also pocket an extra £322 each per year by reducing expenditure on takeaway coffees, lunchtime shopping and after work drinks.